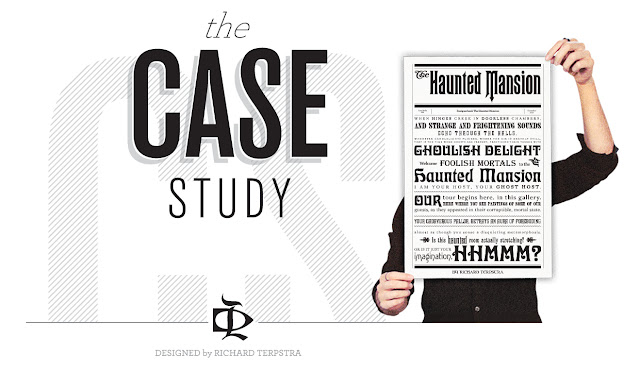 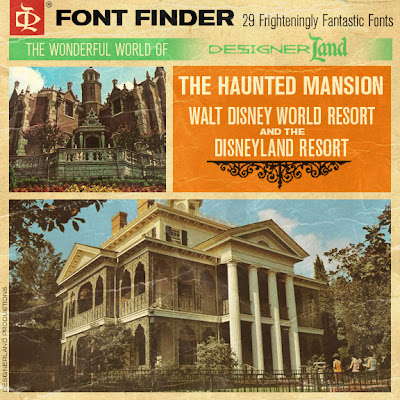 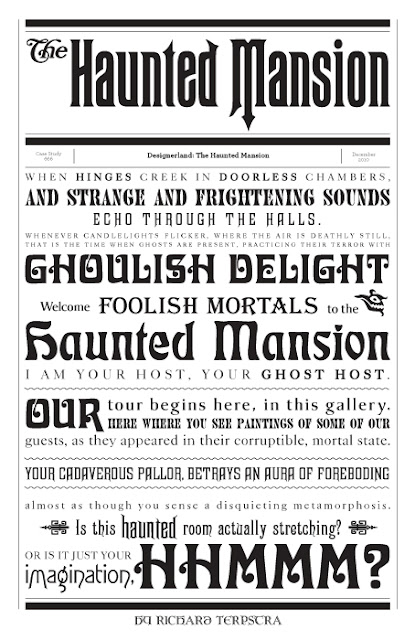 Tracking down and locating typefaces and fonts used in the parks can be a tough task. How does one start? Where does one look? What does one even look for? Millions of questions can be asked by those of you who are unfamiliar with typography. Here are some generic/basic terms thrown around by us designers that can help you understand typography a bit more and what we look for when studying type.
Typeface:  A typeface is what you see
Font: A font is what you use

A simple analogy would be that a typeface is like the entire attraction It’s a Small World while font is the “dolls” inside.  So in summary the font Helvetica is a typeface and Helvetica at a 10 point size is a font.

Commercial Typefaces: Professionally designed by a single typographer or by a type foundry (company).
OPF (Other People’s Fonts): Generic/free fonts.
Display Fonts: Decorative fonts, not suitable for small type such as body copy in a paperback book.

Below is a small graphic depicting other type terms. 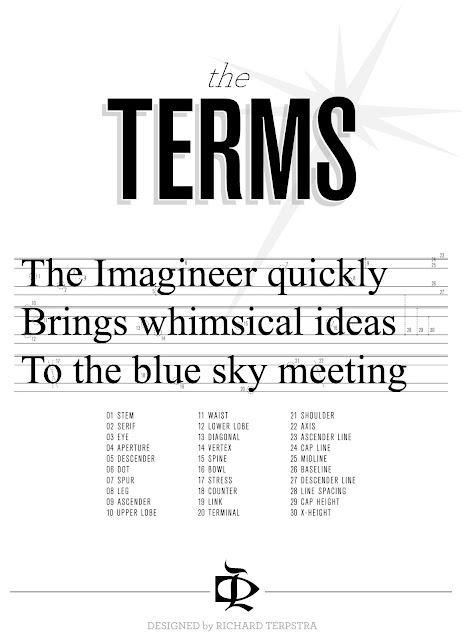 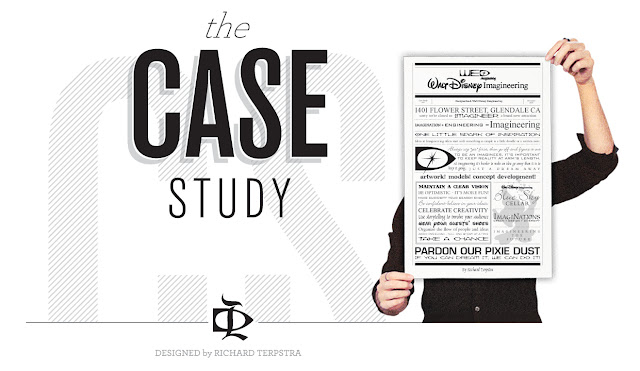 I've decided to give you all a taste of things to come. Here's my first "test run" of my typeface case study poster designs.
Starting on the first of January I'll begin with actual attractions found within the parks but for now I give you my dream: Walt Disney Imagineering.
I, like most Disney dorks, have dreamed of being an Imagineer since I was young. I've tried extremely hard to become one and I will continue to keep that dream alive but in the mean time let's talk type.
For this case study I began by looking at mostly logos and signage. My main focus was on the classic WED Enterprises Logo. Who doesn't love that mod retro design, right? Sadly it's not a real font. It was hand generated by one of the designers at the time...but who????
Well according to Mr. Roland Crump the designer of the original WED logo was none other than Paul Hartley. You see, being so obsessed with this logo I got together with another designer who specializes in custom made typefaces and they designed a font based on it for me at a said price. I even contacted Rolly and asked him is he created the WED Enterprises logo. I thought he'd shed some light on the topic seeing how the Tower of the Four Winds model that resides in the Contemporary Resort has that same D character from the WED logo.
Rolly actually enjoyed the typeface and provided some great feedback. As for now, the designer of this reimagined font has not went public with it yet, but if and when they do I'll let you know.
Other than the custom WED typeface, the poster displays fonts found in the current WDI logo, the WDI ImagiNations logo and website, The Blue Sky Cellar, and a few WDI Construction signs that have popped up in the parks. 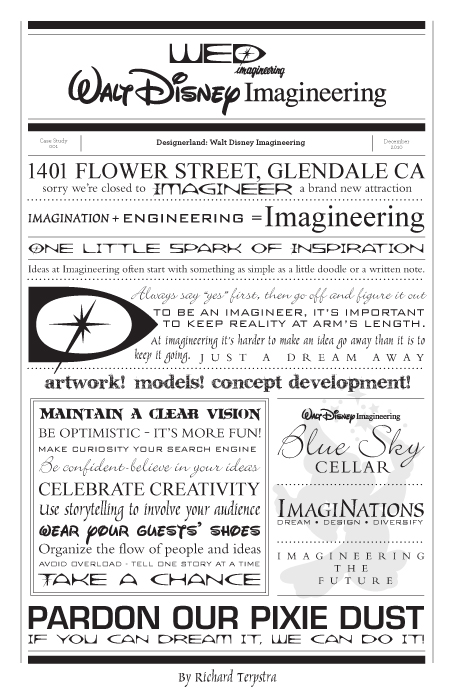 The Wonderful World of Type

Within the upcoming months Designerland will have a reoccurring theme. . .Typography.

I'm what you call typeractive. What is that you ask? Well it can be only described as a physical state in which a person is excited about typefaces and or fonts.

A lot can be said about typography used in the Happiest Place(s) on Earth. Simply because it's used everywhere. Slapped on everything. Is that really a bad thing? NEVER. Especially for someone like me!

I've taken up the challenge of researching and hunting down those fun, fantastical fonts used in the parks. It hasn't been easy but it HAS been fun... not to mention rewarding after searching hours, sometimes days looking for that one san serif that got away.

See you back here on the 1st when our first attraction font "case study" begins!!!!
Posted by Richard at 9:39 PM

To All Who Come to this Happy Place. . .