The fourth installation of the Designerland Soundboards: Pirates of the Caribbean. 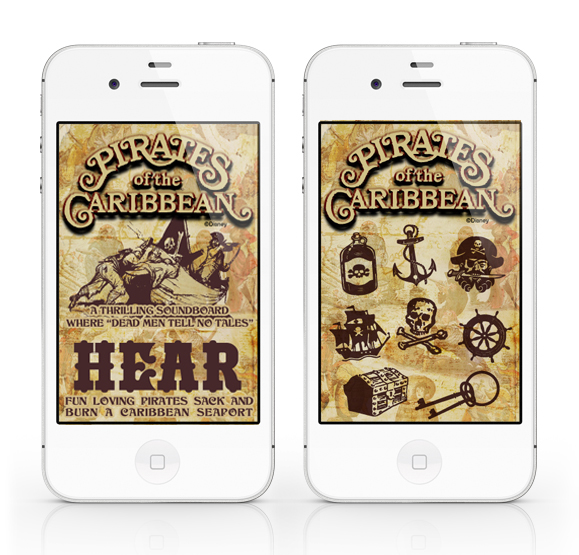 The Pirates of the Caribbean Soundboard is a simple web application I created out of my appreciation for the classic attraction.  A web app will run SLOWER than a normal native app. The difference between a web app and a native app is that a web app is hosted and "lives" on the internet whereas a native app actually downloads and "lives" in your mobile device.

PLEASE NOTE: The soundclips will take a while to download, I wish that they would load faster but unfortunately that's just how web apps work.

The Pirates of the Caribbean Soundboard was developed for iphone users in mind but is supported by Google Android mobile devices as well.

For iphone users: using the internet on your phone go here: POTC
Once the page loads click on the "Add to Bookmarks" icon. Now click the "Add to Home Screen" and the Tiki Room Soundboard icon should load. That's it.

For Google Android users: using the internet on your phone go here: POTC
Bookmark the page. Now open the browser bookmarks screen, then long-press the bookmark you want, then select the add to home screen.

The site will look odd if you just go to the link above on your desktop computer or iPad. The url/site is formatted to fit your mobile device's screen and the sounds will not work unless you're using Google Chrome or Safari.

Well I hope you guys enjoy this latest addition. If you like this app and don't mind it taking a while to load I have a few other Disney attraction soundboard apps in the wings!

Thanks again for stopping!
Posted by Richard at 1:15 AM 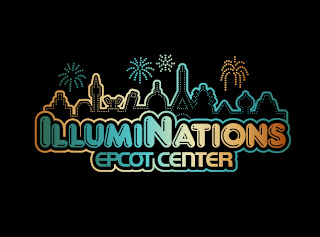 Welcome back to Designerland's Typography Case Study. This weeks study is our conclusion of Main Street USA as I've had to break up the post into a three part series. So sit back and enjoy more of those fantastic fonts used by Disney designers. 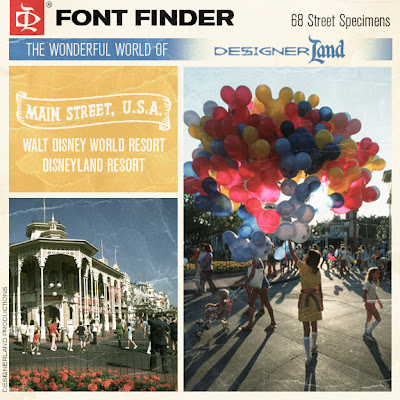 As stated in the first Main Street Case Study, most of the fonts used on the thoroughfare are display fonts ranging in classifications such as Victorian, Script, Tuscan, Latin, Slab Serifs, Serifs, Edwardian, Ornamental, and so on, used for the various fictitious storefront shops. 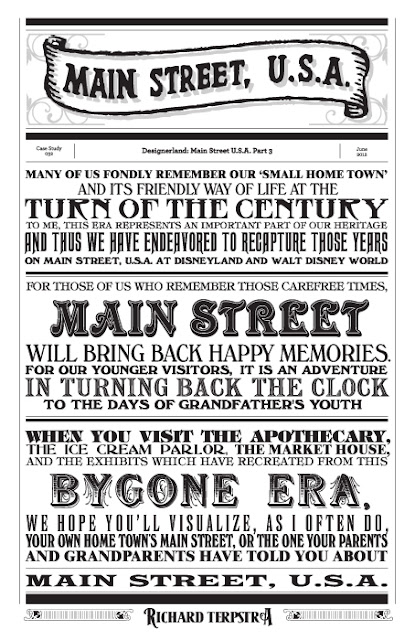 Well that does it for the final installment. . .or does it? Main Street is ever evolving with the plussing of new signage and graphics. New fonts will be added yearly and I can't wait to track more down. In my research for this three part case study I was able to locate 68 fonts and just today I found a new one making it 69. I have over 100 reference photos of fonts I have yet to track down and will always be on the hunt. Look for updates. Well that about does it. Tune in next week as I spent the last three days working on some overdue offerings for Designerland. Until next time, have a great week. Thanks for stopping by.

Hey guys sorry it's taken me a few days to get to this weeks post...for this weeks shirt concept click on the image below. 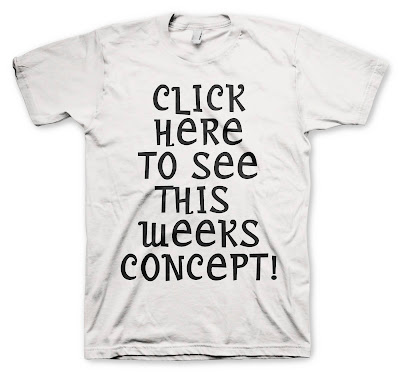 Please sign up and vote for my concept and help bring another Designerland concept to reality.

It would mean the world to me.

Thanks again for all the support!!!!

Welcome back to Designerland and another fun-filled Retro '71 shirt concept. This week’s post is a special three-for-one that I hope you'll all enjoy.

When WED Enterprises started dreaming and scheming up the Walt Disney World Resort, Imagineers had dreamed of 5 home-away-from-home domiciles that surrounded the Kingdom: The Contemporary Resort, The Polynesian Village, The Asian Resort, The Venetian Resort and lastly, The Persian Resort. Sadly, the latter three never saw it past the model phase within the halls of 1401 Flower Street. Various sites have already documented the history of the "Resorts that Never Were" and if you'd like to find out more about these resorts, I suggest you take a look here, here and here.

Much like I did with the shirt series for the faux real estate companies that purchased the land for the Walt Disney World Resort, I decided I would try coming up with logos for these “lost” resorts. I'm sure somewhere in the halls of WDI, in some flat file, there may be some concept renderings of logos for the resorts. Seeing how I don't have access to that type of stuff I just decided to use my imagination...after all, imagination is the heart of all creation, right? I tried focusing on simple iconography mixed with display fonts that I felt carried the story of each resort. The real trick was trying to get them to stylistically flow with the Contemporary and Polynesian Village's original logos.

The shirt colors and ink colors are derived from color combinations that are true to the countries these resorts were themed around. An homage to ideas that never made it, but should have.... 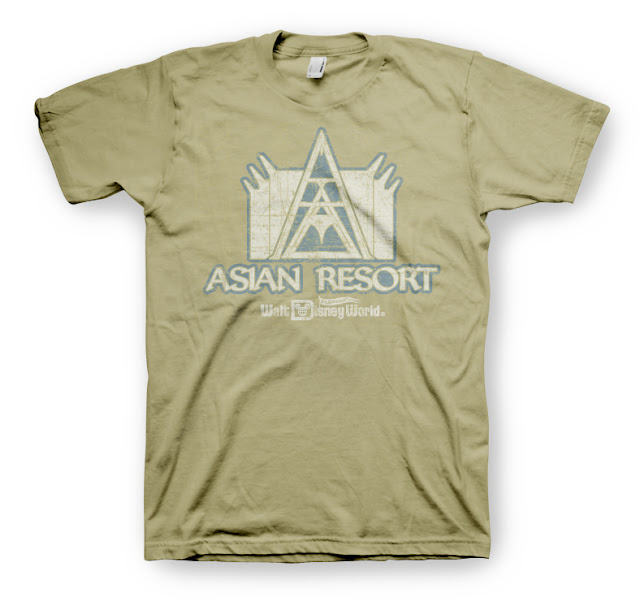 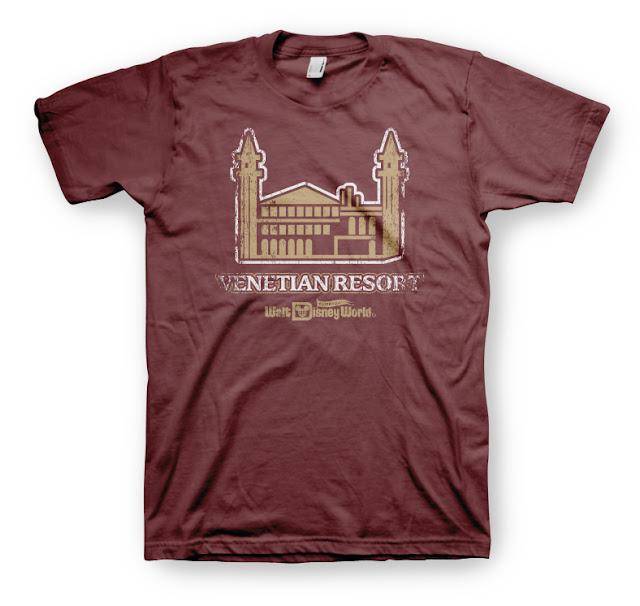 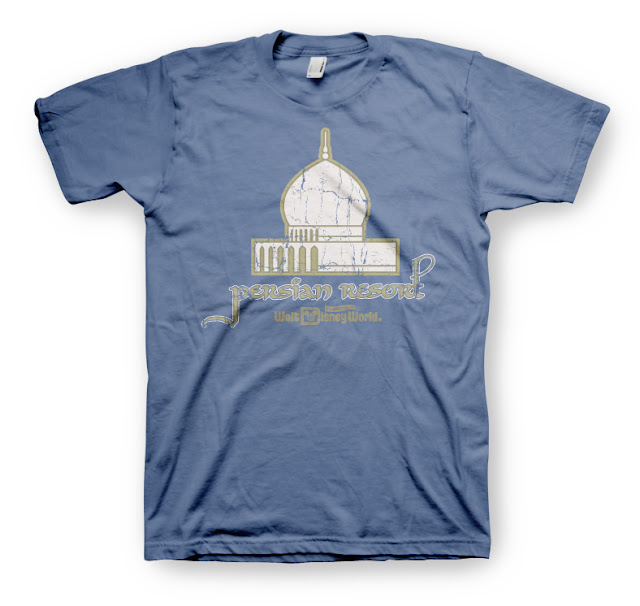 Well that does it for this week’s special post. Tune in next week for the final Main Street Type Case Study I've been promising you. Have a great week and see you all soon.

Sorry for the lack of a new post this week, forgot Monday was a holiday. Be sure to check out this upcoming Sunday's post...I think you guys will enjoy it.


In the meantime, I have another shirt design released in the parks this week. 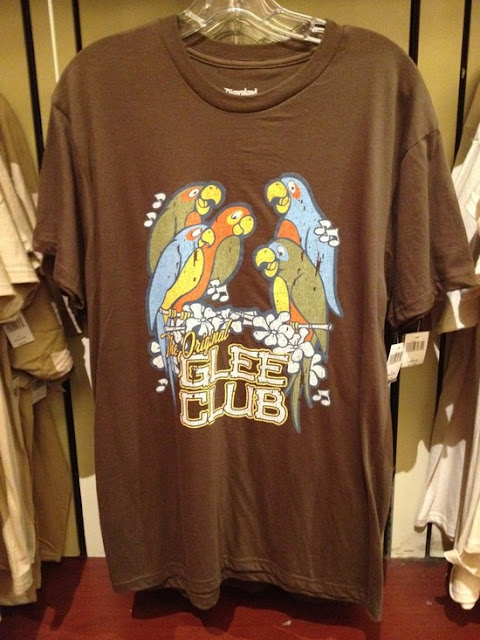 Casey Jones at the Disney Design Group came up with this jaunty idea and asked me to illustrate it! I really love this shirt. It's clever, funny and a touch retro (with the subject matter and distressed texturing).

Be sure to pick one up the next time you're in the parks and tune in Sunday evening for a triple delight!