Welcome back to another edition of Designerland's Typography Case Studies. This week, we'll be looking at some of the various fonts and typefaces used at the Contemporary Resort Hotel. 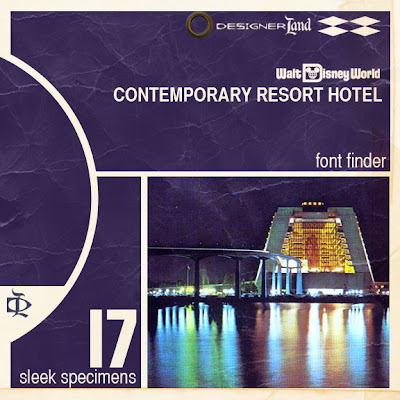 When it comes to typography and the Contemporary, not too much can be said that I haven't already mentioned here at Designerland. When I view the resorts at a glance, I liken it to looking at a "simplified" version of the Magic Kingdom itself. The Polynesian mirrors Adventureland, the Contemporary mirrors Tomorrowland and the Grand Floridian mirrors Main Street. So it comes as no surprise that most of the fonts used at the Contemporary are sleek, modern sans serif typefaces, some of which are actually seen in use over in Tomorrowland. This is what I like to call the three C's of design: Concise, Coordinated, and Cohesive.

Over the years, the Contemporary Resort has seen a handful of changes in its graphic design and typography. If we look at the resort’s logo alone, we can see just how many changes the resort has gone through over the years. Disney designers have kept true to the original feel for the most part with a few liberties taken here and there in the typography, mainly in the form of fanciful display fonts used for various dining and shopping features. 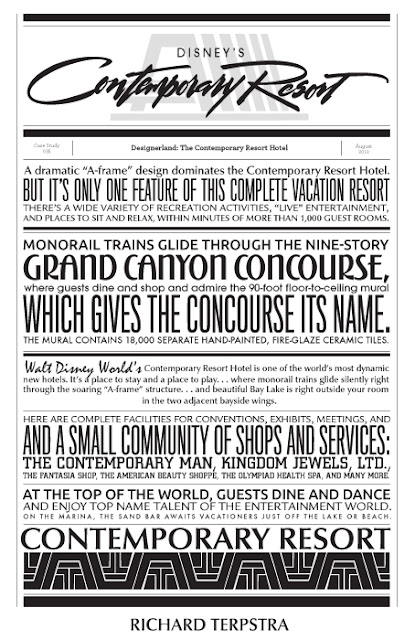 Next time you're staying at the Contemporary, take notice of those classic typefaces used throughout the resort, then see if you can find those same faces used on the Monorail and throughout Tomorrowland. I bet you can! Okay folks, that does it for this week’s post. Tune in next week for a new Retro 71 shirt concept and have a swell week!

Welcome back to a special edition of Retro '71.

Since the launch of Designerland, I have published around fifty-eight shirt concepts. To date, fifty-seven of them are still exactly that: concepts. I have only printed one design to offer for sale. On occasion, I receive emails from my readers asking why I don’t make more shirts available for purchase, and the answer is simple: I am revamping copyrighted material which is the property of Disney. The purpose of these posts is to share my vision of how the Disney images of yesterday can be repackaged for today’s audience. These are just the musings of a dreamer who draws his inspiration from one of the biggest dreamers of all time.

Graphic designers are creative problem solvers and that's what I intend to keep doing, solving the problems of how to repackage iconic Disney images from the past for us fans of today.  When I scan, re-illustrate and manipulate existent images, I will continue—as I always have—to give credit to my sources rather than try to pass the image off as my own work. Because that’s what’s right.

It came to my attention that someone else has turned my original citrus swirl shirt into reality. They made a few small changes to it in order to justify it being different and their own concept but the changes weren't great enough. They failed at solving the creative problem of taking inspiration from my shirt and creating something new and different. 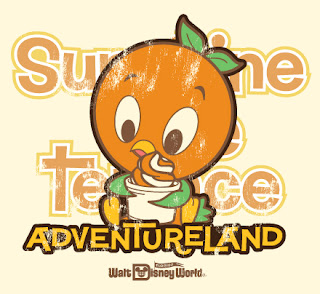 This week I decided to show how an old concept of mine can be re-imagined to be something new and different!

With the reopening of the Sunshine Tree Terrace a new font palette was introduced. The new display typography was showcased throughout various merchandise offerings done by those amazing designers over at the DDG! I knew that my typography as seen on my first citrus swirl shirt needed updated to align what what is seen in the parks today.

The cone was removed after many said that they preferred the swirl in a cup. I know it's offered both ways and it's your preference to choose which way you like it. However, since my last shirt had a cone I opted for the cup in this new layout.

The original cups of the Walt Disney World Resort where not simple solid cups as seen in my design. Instead they looked more like the paper cup Kevin and Jody redesigned for the 40th. With the classic castle icon on one side and the D/globe ears logo on the opposite, all printed in oranges and blues.
I didn't need to really "gild the lily" as Walt would say and try to jam pack all the design information into a small space so I opted not to include it. A good designer knows when the message is received. It would of been overkill to include all of those elements and there is such as thing as over-plussing! 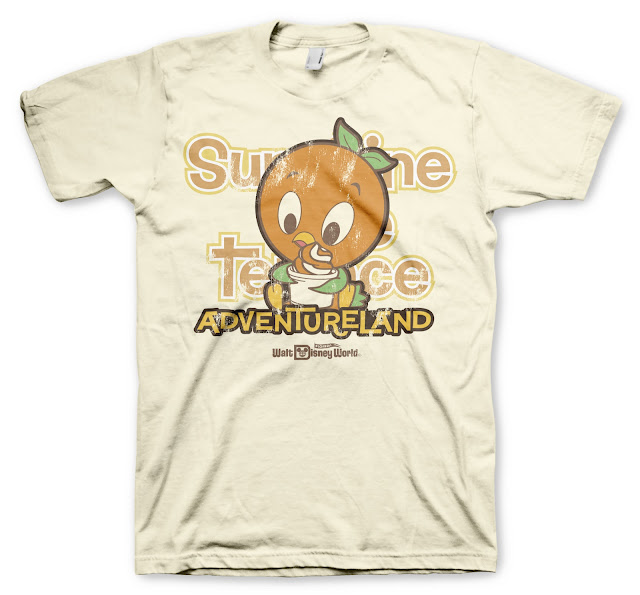 Hope you guys enjoy the new take. Be sure to tune in tomorrow for a new Designerland Typography case study as we look at the amazing fonts found at Walt Disney's Contemporary Resort. See you tomorrow!
Posted by Richard at 12:20 PM

Welcome back to Designerland. I hope everyone had a good weekend. This week’s post is a Retro '55 and Retro '71 combined post that I hope you all will enjoy.

This week’s shirt design honors the beloved attraction The Country Bears Jamboree. Since it was recently announced that the show will undergo a refurbishment, I thought this would be a fitting time to pay tribute. This design is based more specifically on the Country Bear Vacation Hoedown "overlay" designed for Disneyland, which was rolled out in 1986, replacing the original Country Bear Jamboree show. In May of that same year, Walt Disney World decided to change up their classic show by using this same overlay, but in 1992, WDW restored the show to its original glory. 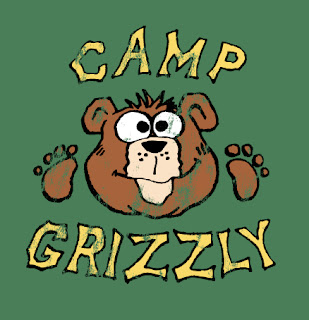 The shirt design is based on Henry's old camp t-shirt he sported in the show, which was meant to look like an old vintage camp tee that he got while a younger cub at Camp Grizzly. The shirt is basically the same design Disney Imagineers came up with plus our time treasured distressed texture. 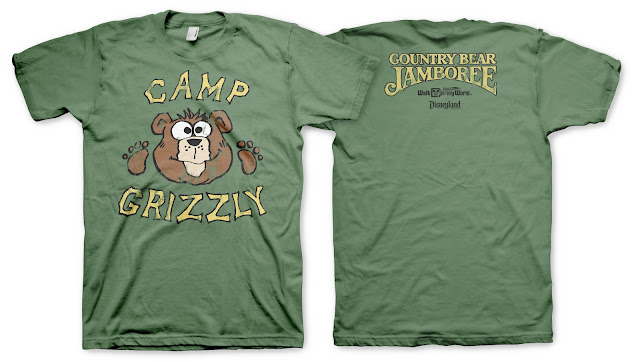 Could Camp Grizzly be part of a bigger WED/WDI story dating back to the time when The Country Bears and Moonshine Express was in development? Could it somehow be related to Grizzly Peak and Grizzly Gulch? Needless to say, WDI loves using the word Grizzly when developing attractions based on bears and the frontier...is it all just a coincidence, considering that California's state animal is the Grizzly?

Well that does it for this week’s post. Tune in next week for a new Designerland typography case study and have a swell week!

Greetings folks! Welcome back to another edition of our Retro '55 apparel line.

This week’s concept is based on the fan favorite, the Mint Julep. The idea for a Mint Julep t-shirt has been in the works since I was designing the original Tiki Pineapple Whip tee here at Designerland. I hadn't tried this delicious drink until last year while at the Disneyland Resort and I instantly fell in love. I believe I had about 15 of them over the span of a week, and when I came home, I set to work trying to pinpoint the recipe. 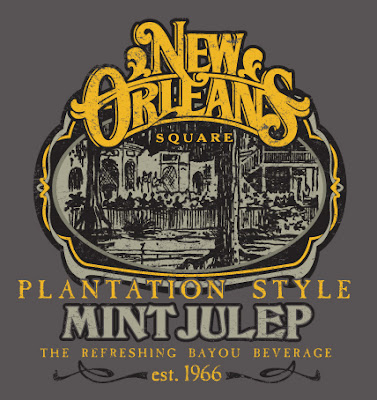 Instead of designing some fun character holding the beverage or turning the plastic cup itself into a cute character, I decided to create a shirt that had more of a vintage label look to it, as if the Mint Julep was actually manufactured at a nearby plantation and exported as a fine southern beverage. The design itself has the New Orleans Square logo above the Blue Bayou, which was recreated by scanning one of the original New Orleans Square souvenir bags. Typeset below that is the beverage title set in the same font seen in the parks, along with some added storytelling copy that helps complete the look of the label. I also put the established date when New Orleans Square opened at Disneyland, flanked by an art nouveau whiplash curl. 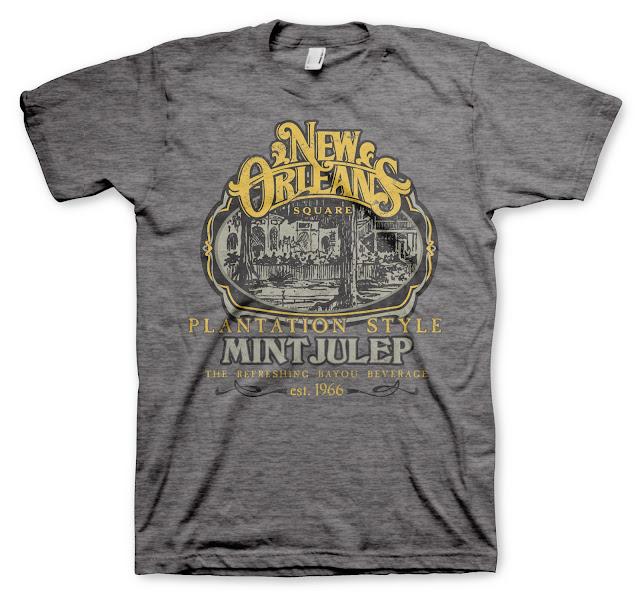 Well that does it for this week’s concept—hope you all have a swell week. Thanks for stopping by.

Give up??? Find out the answer over at Disneydesignerland's Kuler page found here.

Check back for more random updates to Wonderful World of Kuler.

This week two fellow followers and supporters of Designerland sent in photos of them sporting the classic Tiki Pineapple Whip Shirt!

Cori sent this in and said this is how a true fan gets ready for school . . . 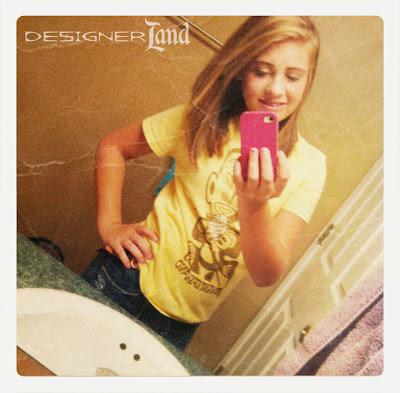 Dan D. also sent this jaunty picture of him in the shirt at the parks.... 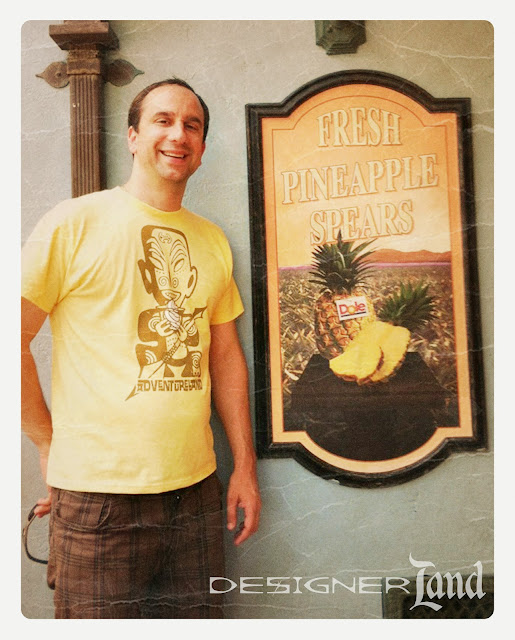 Thanks for sending this in guys and for the support! In other news a Jungle Cruise skipper reported seeing a family of four in the parks yesterday all wearing the shirts! Glad to hear you guys are still enjoying the shirt. Be sure to check in tomorrow for an all new Retro '55 Disneyland Shirt Concept.

Welcome back to another Designerland Attraction Case Study. This week, we'll be leaving the Magic Kingdom behind as we jump aboard our highway in the sky. For those of you standing, please hold on to the hand rails throughout our journey and stay clear of the doors. And for the comfort of others, no smoking, please.

When it comes to the Disney Parks’ Monorail Systems, there's so much history we could talk about, from the Monorail’s great beginnings at the Disneyland Resort to the majestic fleet at Walt Disney World. But here at Designerland, we talk type, so let's delve into those finicky and at times hard-to-find fonts that have appeared in, on or around the Monorail. 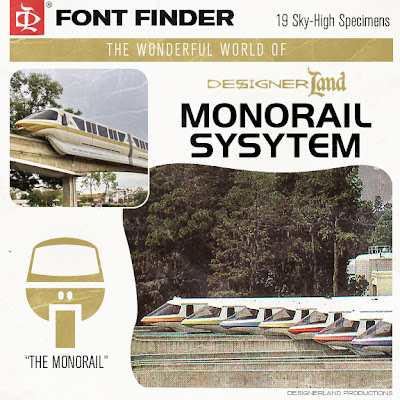 When thinking of the Monorail, the terms futuristic, modern and streamlined come to mind. What better typefaces to use than sans-serif fonts which often share this same description. Looking back at the first Monorail at Disneyland, most of the type used were actually hand-generated display fonts that looked like something out of a sci-fi comic. Over the years we see a transition to more classic typefaces such as Futura and Helvetica. The Walt Disney World Resorts’ Monorail signage and graphics pretty much align to those standards with a few exceptions, depending on which resort you're staying in.

A few years back when Imagineers decided to give Disneyland's Monorail a facelift, they decided to brand the attraction with a decorative display font alongside a very popular Epcot Center display font for most of their signage, merchandise and literature. When comparing the two resorts from a typographical viewpoint, Disneyland's Monorail is more fantastical in a Buck Rogers sort of way, whereas the Disney World Resort’s Monorail is more mod. 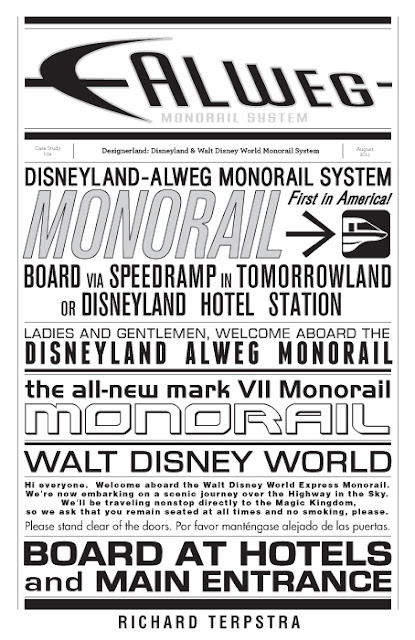 Well that does it for this week’s post. Thanks for stopping by and be sure to tune in next week for a new Disneyland Retro '55 shirt concept. Until next time!