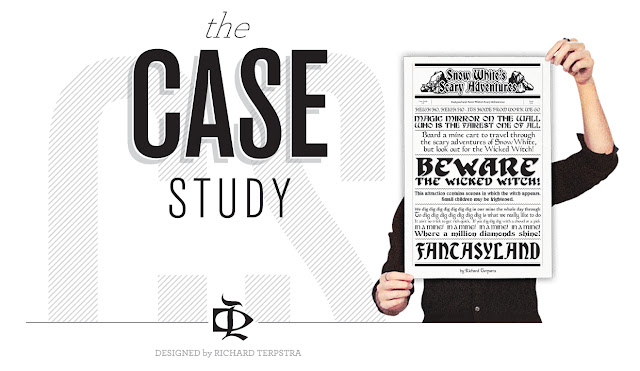 Welcome back, and for you first-time visitors, welcome! In this week’s Designerland Typography Case Study we'll be looking at the typefaces from another one of Disney's classic dark ride attractions, Snow White's Scary Adventures. Snow White's Scary Adventures is one of the original attractions that remain from Disneyland's opening day back in 1955. The attraction originally opened under the name Snow White and her Adventures. At the time, Imagineers might have been a little too avant garde in having guests take on the role of the beloved beauty. Guests didn't quite understand the attraction from this perspective and often asked why Snow White wasn't featured. Needless to say, the Imagineers quickly added her to the attraction to please the guests. Over time, the attraction has seen some minor upgrades to the show-building facade and also a name change due to parents complaining that the ride was a tad on the scary side. I have to agree with the parents: that attraction scared me as a child—when that wicked Queen turns from her mirror, I would always look away. Such a simple gag but HIGHLY effective. 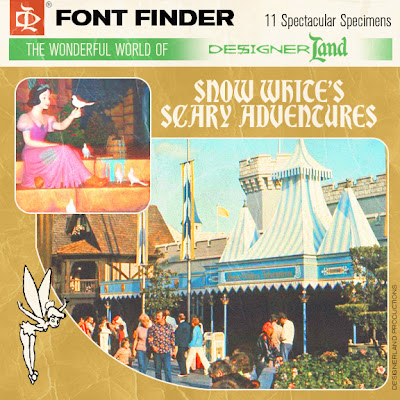 The attraction loosely follows the plotline of the animated feature we all know and love. While Disneyland had it first, the attraction quickly became a staple of the other theme parks. The Walt Disney World Resort, Tokyo Disneyland and Disneyland Paris have their own versions as well, but that's soon to change. With the plussing of Walt Disney World's Fantasyland, Imagineers have decided to step it up a notch with an entirely new attraction based on this Oscar award-winning feature. I can only imagine the typography and signage the designers will come up with!
When looking at the typography of Snow White's Scary Adventures, there actually aren’t too many fonts to be found. This is pretty much the case with most Fantasyland attractions: limited space, shorter-length queues, and not too heavy on the thematics and atmospheric details of the attraction. Most of the typefaces of Snow White's Scary Adventures come from what I call the classic Disney Fantasyland font palette: Black Letter, Gothic, Old English, and Serif. While the fonts listed are mainly European fonts derived from British origins, the classic Brothers Grimm tale of Snow White was from Germany. Even though the main typefaces aren't really from the story’s point of origin, they still work with the overall look and feel of Fantasyland. In addition to these more typical fonts, this attraction also features Art Nouveau. But what does the Art Nouveau period have to do with Fantasyland and Snow White??? Actually, it really fits when you study some of the stylings that Disney's Animators brought to the feature film. When watching the movie, one can notice the Queen’s elaborate peacock throne—the throne’s design slightly resembles the work of famed Art Nouveau artist, Frederik Mucha. It just so happens that Disney's designers used an Art Nouveau display font for signage warning of the Wicked Witch. Was this planned from the start or simply a happy accident? I'd like to hope it was all a part of the designers’ plan. 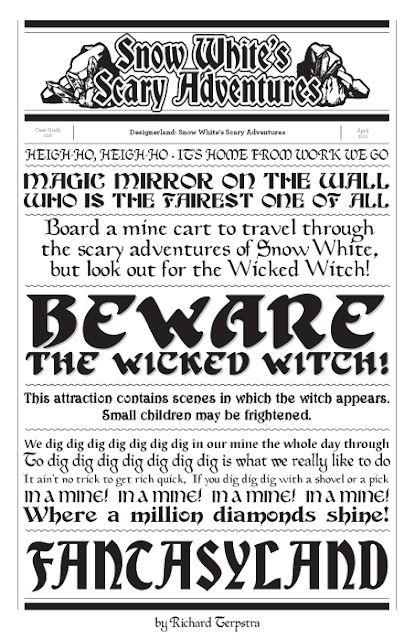 That concludes this week's adventure in typography. See you back on Monday for a new addition to the Retro '71 apparel line. Until next time, have a great weekend!
Posted by Richard at 1:36 AM