Welcome back to another fun-filled typography case study here at Designerland. This post will conclude my research into the fantastic fonts of the Magic Kingdom. We will soon move on to the resorts and then we will take a look at Epcot at the beginning of next year.

There are a few attractions within the Magic Kingdom I didn't cover simply because they didn't have enough fonts and typefaces for me to conduct a proper investigation. However, if you can think of any attractions that you feel I overlooked, let me know. I may open a special reader case study just for you! My only stipulation is that the case presented MUST come from the Magic Kingdom—other parks such as Epcot, DCA, DHS, AK and so on have their own case study files which are currently open and in the works. 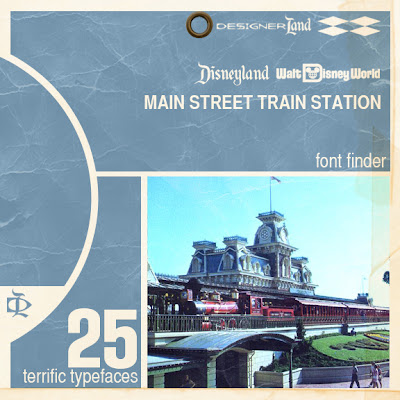 With that said, let’s end our grand circle tour of font finding properly at the Main Street Train Station. As mentioned in the Main Street Case Study, the train station continues using serif fonts, but instead of over-designed, period-appropriate display fonts, the station contains 90% classic serif typefaces with a few display fonts thrown in. Some of the same typefaces found here can also be found over in Liberty Square. However, Disney Designers decided to break one rule, especially when dealing with typography and era-specific looks. Wanna know what it is? It’s the main Disneyland and Walt Disney World sign, which faces the entrances to the parks. Look closely—do you see a futuristic sans serif typeface yelling out the population of the park? I sure do. I would love to know the reason for this odd man out. Maybe they needed a semi-condensed typeface that would allow for all those zeros. Who knows? 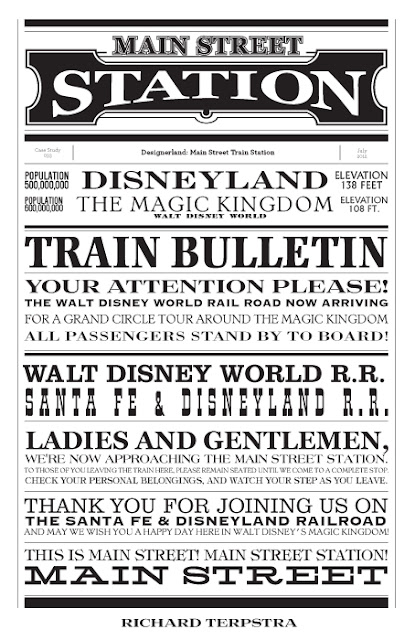 Well that does it for this case study. I’m going to be taking a small summer break and return in the near future with more Designerland offerings, so I hope to see you back real soon. Thanks for stopping by and have a swell week.