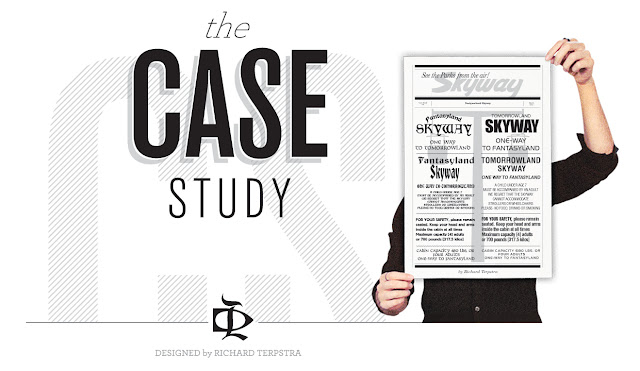 It's a two-for-one typography treat this week as we look at the gone-but-not-forgotten Disney Skyway, so let's jump aboard for a one-way trip into this week’s case study!
The Skyway was a simple gondola lift attraction that ushered guests back and forth between Fantasyland and Tomorrowland. The first Skyway was built at Disneyland and tunneled through the icy slopes of the majestic Matterhorn. Disneyland wasn't the only park to feature this attraction: both Walt Disney World and Tokyo Disneyland had Skyways of their own. Sadly, the Skyway at Disneyland was closed in the early 90's, and like falling dominoes, Tokyo Disneyland closed theirs a few years later, followed shortly by Walt Disney World.

The Skyway still has some presence in the parks, but that's all about to change shortly. The Skyway station still sits to this day in Fantasyland at both Disneyland and Walt Disney World. Walt Disney World's station is about to undergo a major refurbishment to house larger restrooms, feature lush landscapes and possibly some water features as well. I'm looking forward to what the Imagineers have in mind, but I’m also hoping they'll retain a subtle nod to the original attraction. 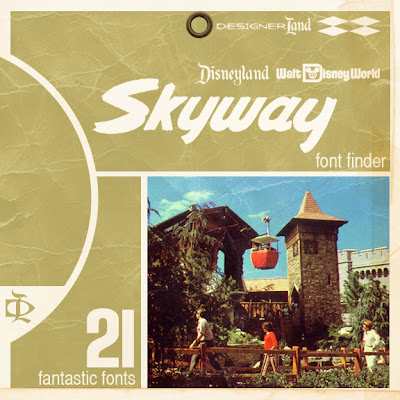 Now on to the type. Let's start by looking at the Fantasyland Skyway first. Like all attractions in Fantasyland, the Skyway used decorative display fonts such as Old English, Blackletter and Fraktur, which all combine the themes of English/European fairytales with a Swiss edge to convey the theme of a gondola taking us high into the snowy alps. Once again, the designers have used more German-based fonts to represent Switzerland. Swiss typography does get featured—just not in Fantasyland.
The Tomorrowland Skyway Station used only one classification of fonts, sans serif. The main font used on the signage was the classic typeface Helvetica, which was designed by typographer Max Miedinger back in 1957 in none other than Switzerland. Various weights and sizes where incorporated on the signage along with another popular yet overused typeface, Impact. A few decorative futuristic fonts made their appearance later on in the years. One specific typeface was used to brand Walt Disney World's second gate. 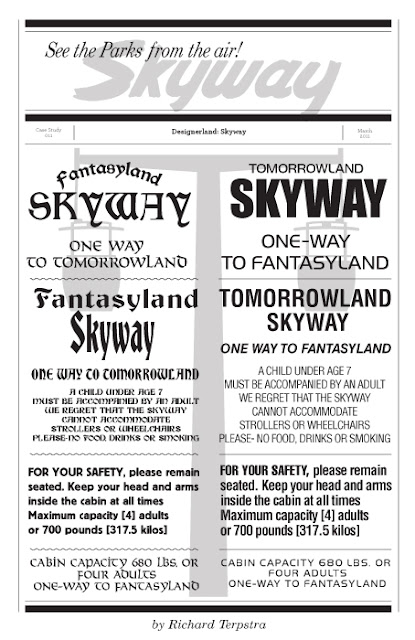 I miss the Skyway—it was a great way to get off your feet for a few minutes and get a bird’s eye view of the park. It was a small thrill as well—I remember being scared as a child that the cables would snap. I even miss those out-of-place pylons positioned right in the middle of Fantasyland. One thing I do not miss is seeing the unfinished tops of the show buildings within the park—it was the first time I had ever seen the illusion revealed. Ever since, I've been interested in the art of illusioneering, if you will, which has been perfected by those mad geniuses over on Flower Street.
Well that about does it for today. I look forward to seeing you back on Monday for a new Retro 71 design. Thanks for stopping by and have a great weekend.
Posted by Richard at 11:49 PM