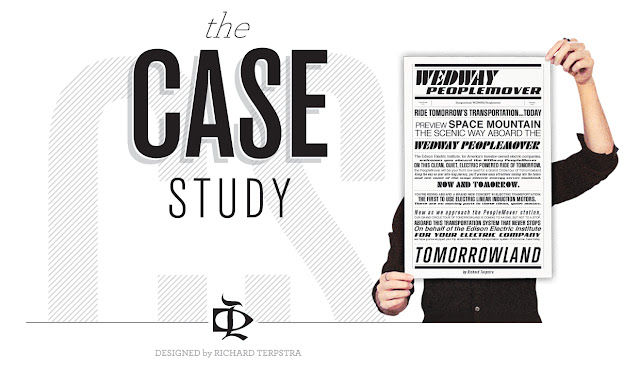 For this case study I focused mainly on Disneyland and the Walt Disney World Resort's Peoplemover prior to 1994. Call me a traditionalist, but personally, I prefer the early Tomorrowland look (right down to the even fonts) to what is now present in the parks.

In the world of fonts nothing says “Tomorrowland” like sans serif typefaces. Back when Disneyland, and even Walt Disney World, were being built, sans serif typefaces where used to convey simplicity, modernism and the future. Sans serif typefaces are fonts that lack the small features called "serifs" at the end of the strokes. The term comes from the French word sans, meaning "without".  All sans serif typefaces have relatively little stroke contrast and are highly legible as display, and with added spacing, are successful as text. Today, however, more sci-fi themed display fonts are being used throughout the land. Because sans serif fonts are plentiful in today's world, simply using one would not convey the same message as it did back in the day. 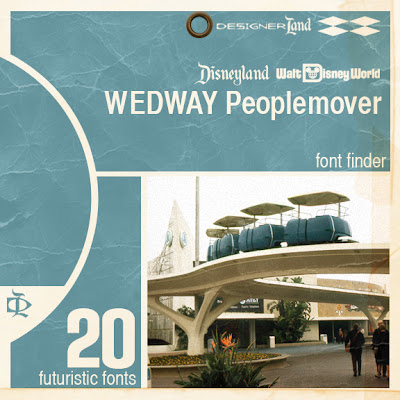 I began looking at both Wedway Peoplemover attraction posters before starting my font hunt. What is interesting about Disneyland's poster is that the designer used a typeface similar to that of the attraction’s sponsor, Goodyear, seeing how it utilized the propulsion system of rotating Goodyear tires. If you jump over to the Disney Park Attraction Posters Blog you can see a comp of Disneyland's original Wedway poster. Notice the main typeface of the Peoplemover does not resemble the Goodyear font at the time of it's conception.

Walt Disney World's Peoplemover opted for new technology. Instead of using tires, they used state-of-the-art linear induction motors. Disney World's attraction poster uses the display font, Geometric Stencil (originally designed by the famous typographer Paul Renner), but manipulated it to look like it has been italicized.  Designers sometimes use italic fonts to imply movement or speed with their diagonal stress.  This was a simple but effective solution by the designer.  However, some may consider the use of italic fonts to convey that something is fast or speedy to be a sort of designer’s crutch. This same type treatment is then used for Disneyland's Peoplemover through the Super Speed Tunnel poster by Jim Michaelson, which was designed a few years after the creation of Disney World's Peoplemover attraction poster. 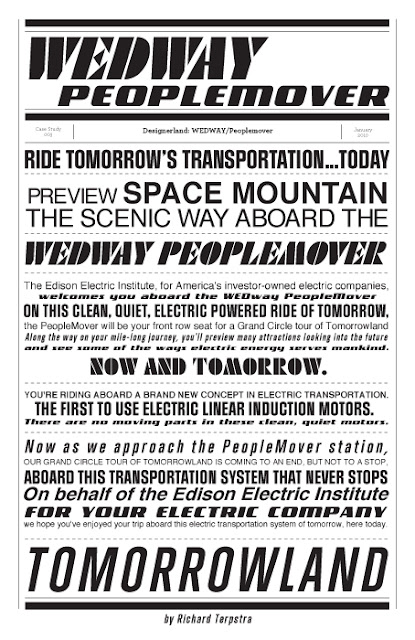 Signage and fonts are limited when it comes to the Wedway Peoplemover, but through my research and various closure signage I was able to design this simple yet futuristic case study poster. Well, that's about it for this week. Once again thanks for visiting and see you back here next week!
Posted by Richard at 10:57 PM